One year ago today, I met the man who built Eugene’s geodesic dome studio, and wrote a blog post about it. To commemorate this anniversary I am reposting it here, on Gene’s official website. I hope you enjoy it~Judith 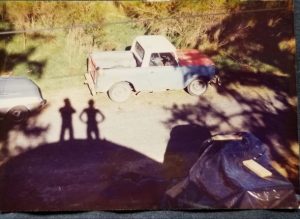 Last week I got a phone call in response to the article about Eugene Landry. The caller said he was sitting in his car at Swanson’s. He’d been reading the newspaper while his wife shopped for groceries, and found an article I’d submitted about my search for the art of Eugene Landry. This was the second phone call I’d received since the story was published six weeks ago. The story I wrote mentioned the geodesic dome and small beachfront cabin where Gene once lived and made his art.

“I’m the guy who built Gene’s dome.” His voice was soft and had a hint of a smile.

The tribe had razed the dome and cabin in 1998 to make room for casino parking. Today a gas station sits on the site. I talked to people to get a history of the dome, but after forty years, the facts were hazy. I heard the dome was put up during the summer of 1978, possibly by a hippie who drove a Rolls Royce…or was it a Citroen? or was it someone else entirely? Maybe it was the guy with the great danes. Someone said a couple of guys from Canada might have put it together from a kit and then moved on. And so it went. I never expected to talk to the actual builder of the dome, figuring he was either a fugitive, dead or just plain untraceable.

And suddenly this sweet guy from the nearby town of Cosmopolis was on the phone, with a story to tell. 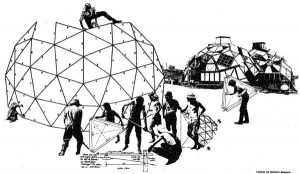 One week later, I drove through a quiet neighborhood in Cosmopolis, an old logging town, looking for the home of Don Norkoski. Following his directions, I turned off off Highway 101 and looked for “the house surrounded by rhododendron bushes”. A sandy-haired man wearing a grey blazer over a colorful shirt and blue jeans greeted me at the door. He reminded me of a high school band teacher, he had that air of patience and good-natured smile. Don invited me inside and introduced me to his wife.
In the living room, a box of photos and old newspaper clippings sat on the couch, along with two original pieces of Gene’s art. Like something out of a dream, he handed me a photo of Gene’s dome. At last-proof that it really existed! 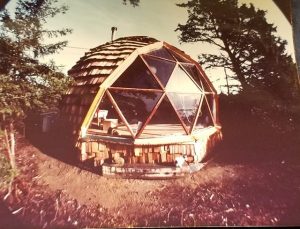 While he was a student at Evergreen State College in Olympia, Don took a class called Space, Time and Form. He learned how to build geodesic domes from a book by Lloyd Kahn called Domebook.

“I would read Buckminster Fuller-he was the guru of domes. I just got the urge to build one. I’d spent too much time in academia and not doing enough with my hands. Once I got into it I never left. I went blue-collar.” He shows me a photo of a dome at the corner of Smith and Butte creek.”This was my hippie place,” he smiles. “I was an infamous North River Hippie.”

Don was 22 years old when he dropped out of Evergreen and went into the dome building business, setting up shop in the home of a friend on Cedar Street near the river, where he built a greenhouse. And then, “Gene showed up one day. He heard about me and he looked at this (the greenhouse) and he said ‘can you build me one?'”

Gene hired Don to build his dome. Back then, in 1976, the daily wage was five dollars an hour. Don recycled old-growth 2x4s, planing and oiling the surface, to build the frame. They used beach-salvaged Alaskan cedar to make the girders. “It smelled like perfume when you cut into it,” he said, with a nostalgic tone of voice.

Over the course of a summer a dome was built and a friendship made between Don and Gene. He visited after the job was completed, showing me a photo of how Gene kept it as an art studio. It was sparsely furnished inside, with a wood stove and simple lighting. I asked Don why he thought Gene liked domes.
“The dome had an ambiance about it. You always found yourself looking up, staring at the patterns..and it would definitely help with inspiration, especially with a window looking out over the bay.” 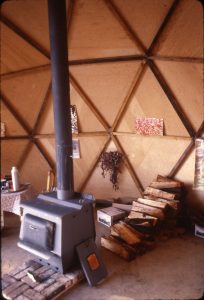 After we finished talking about building the dome, Don showed me two pieces of Gene’s art he bought during that time period. One was a highly detailed charcoal drawing of a boat at the docks. Don said “I liked his art. But we were poor hippies. I had a sister in law, she was older than me, she grew up in a different generation. She never said anything but I could tell she didn’t like me…being a hippie. There was a short period of time where my brother and I exchanged gifts at Christmas. So I decided to take a chance. I bought the picture from Gene. I remember the price, $75. That was two days wages. I gave it to my sister in law and she loved it. Had it professionally framed. And I got treated a little nicer since then.”
Don’s brother gave the drawing back to him after his sister in law passed away in 2001.

As the time came for me to leave, I asked Don how he would sum up his time with Gene. He paused for a moment to gather his thoughts and find the right words.
“He always had a smile, was always positive…there was never any negativity or reaction to his plight. I know that. That’s one thing I definitely came away with.” 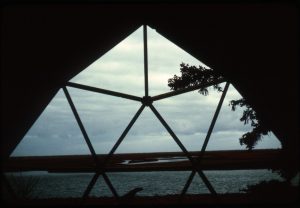