Eugene “Gene” Landry (1937-1988) was a noted Native American artist, who painted from the confines of a wheelchair. His personal story is one of perseverance, of an artist who created despite setbacks, always with humor and style.

Landry’s art offers a glimpse into a transitional and little-documented time in Northwest Native history. His paintings are important because they represent an indigenous artist’s portrayal of his own people during a time when Native Americans were erased, marginalized, and misrepresented by stereotypes in media and public education. Landry painted contemporary portraits of his people, depicting them as they were.

Of Hoh and Quileute descent, Gene was born in Taholah, on the Quinault Reservation. Adopted as an infant by Myrtle and Fred Landry, he grew up on his mother’s reservation at Shoalwater Bay. During his formative years, there were no practitioners of traditional native arts living on the reservation. Gene developed his budding artistic talent along classical Western European lines, until illness struck during his senior year of high school.

He spent over two years at Cushman Indian Hospital near Tacoma, where he was treated for tubercular meningitis. The disease paralyzed his legs. As a hospital patient, Gene underwent painful therapy, but still continued to paint. At a subsequent rehabilitation facility he suffered an injury to his spine, which resulted in permanent damage to his right (dominant) arm. Gene trained himself to use his left hand to hold a pencil and to paint, developing a signature style.

In 1961, Gene enrolled at the Derbyshire School of Fine Arts in Seattle. He also studied at the studio of Phillip Levine. By the mid-60s, Gene was showing his work throughout the Pacific Northwest. He married Sharon Billingsley, an artist and model, in 1965.They went to Paris to study the art of Post Impressionists, which wielded a major influence on Gene’s style.

Their marriage ended in 1972. Gene stayed on the reservation, becoming involved in cultural and heritage activities, painting, and helping at his family’s businesses and museum. Later in the decade Gene traveled to the Southwest, Mexico and the Philippines, seeking traditional healers. As his condition worsened he adapted by holding a paintbrush in his mouth to reach the higher places on a canvas.

He lived in Santa Barbara in the 1980s, where he was part of the local art scene and operated a studio gallery. In the later part of the decade he returned to Shoalwater Bay. He died shortly before his 51st birthday, on April 7, 1988.

During Gene’s lifetime his tribe faced many political and cultural challenges. Landry’s body of work brings focus to this transitional era. Interviews with his portrait models act as a bridge-giving context to mid-century tribal history. Landry painted the world around him and the people in it. As one elder said, “I can’t really talk about Gene without talking about tribes and reservations. I can’t separate Gene’s story from that story.”

The stories and the art live on. An exhibit of restored works opens in May 2020 at the Shoalwater Bay Heritage Museum, located on the former site of Landry’s art studio and geodesic dome. 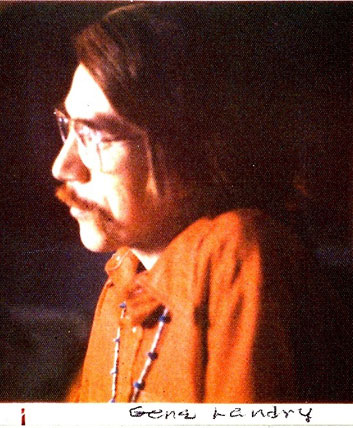