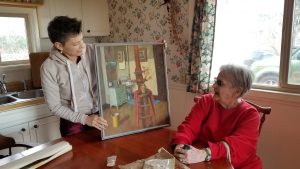 Last November, 82-year-old Sara Nelson sent me an email. She had heard about my search for Eugene Landry’s art and sent two photos of paintings she owned, offering to show them to me after the holidays. In the meantime, we messaged back and forth. Sara wrote “I am deaf so can only communicate via email or texting. You can call my husband, Charley…” She added that Charley, an Alaskan Native, excavates fossilized walrus ivory for scrimshaw carvings. Because  I am a metalsmith who incorporates organic materials in my work, she thought I would like to see some of Charley’s lapidary art too. I was definitely interested. 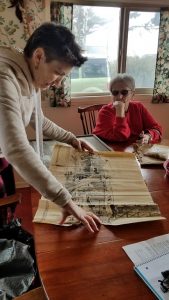 After 46 consecutive days of rain, the sun came out last week, and so did Sara Nelson. My friend, professional photographer Marcy Merrill was on hand to document the art while Sara and I visited.

I asked Sara to tell us where the art came from;

“Fred Landry, his (Gene’s) daddy, he was a sweet man. I met him at a sale he was having, and he told me to pick out some of them and I did. In the old barn. In about 1995. There must have been 30 to 40 pictures, sketches…He owned them. I saw that the water was creeping up toward them. I had them framed and carried them from house to house to house.” 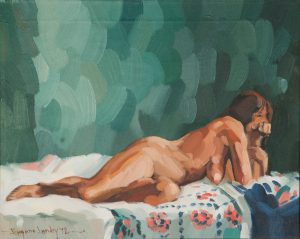 It was great to see another one of Gene’s nudes. As of this posting, the model’s identity (like all of his nude models) remains unknown. Judging by the dark green background it was most likely painted in his cabin on Shoalwater Bay.

There was also a charcoal drawing of a decaying dock scene, the location unknown and undated, but judging by the condition of the paper and the style, probably from the 1960s. And another painting-of Gene’s art studio. 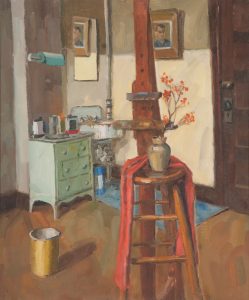 The painting is unsigned but a pencil inscription on the back in Gene’s hand reads March 9, 1962. Other canvases from this time period list a 15th Ave address in Seattle.

There is a moodiness about this piece, a noir-ish quality: the dark wooden door and molding, the ancient corner sink and exposed pipe, the battered-green dresser. In the center of the room, a cadmium-red scarf is draped across a wooden stool, a slash of scarlet echoed by the red blooms in the vase. A wooden easel adds a vertical element to the composition, as does the door, the pipe, and the edge of the wall.

The sink is stained with paint, the top of the dresser holds cans of turpentine and linseed oil. You can almost smell the intoxicatingly piney odor, warmed by the afternoon sun streaming through the window. A wastebasket set in the middle of the floor glows, golden in the light. A portrait on the wall, partially reflected in a mirror. The room itself has become a still-life.

As the afternoon came to a close, Sara gathered up fossiled walrus ivory and agates from the table, giving a few to me for jewelry making. She handed me a manuscript she helped Charley’s mother, who was an Eskimo Native, to produce containing turn-of-the-century Alaskan history. It is an eye-opening read.

Then Sara made another gift to me. It took me completely by surprise. I asked if she was sure. She said, “I wanted  to make sure it went to someone who would love it and I knew you would.” 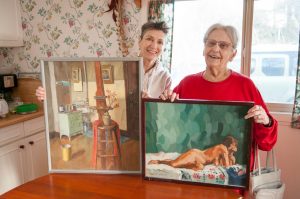