A People and a Place 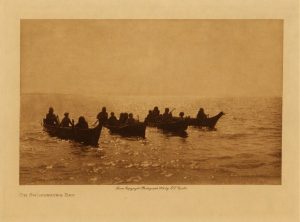 Life for the people living in the various villages scattered around Willapa (Shoalwater) Bay and the Coast from Tokeland to Westport, was largely unchanged for a millennia. The people were made up of a cultural group now known as South West Coastal and/or Chinookan. Two related cultural groups under the larger “North West Coast” group. The biggest distinction and perhaps the only distinction between these two groups was language. The more northern group predominantly spoke Thlawaltmish, a southern Salish language. The Southern group spoke Chinook. The two groups were highly intermarried which resulted in the material and ethnographic cultures of the two being nearly identical.

It wasn’t until relatively recent that things changed for us. In 1788 the bay was “discovered” by John Meares of the East India Trading Company. While this is often considered the first direct contact with outsiders, general knowledge of Europeans and settlers in other parts of the country were known by the people. In addition to that, oral tradition does have some ancient stories about things like lost ancient Chinese vessels being stranded on nearby shores.

These first encounters were often not much more than a bit of trading and years often passed in between encounters. Lewis and Clark’s famed expedition reached the mouth of the Columbia in 1805 and the area then was still largely untouched by outside influence.

The expedition resulted in the great expansions west by the United States, but by the time James Swan lived on Willipa Bay in 1854, it was still largely unsettled. However, by this time several waves of various illnesses had resulted in an estimated 80-90% death rate of our people. This meant, that while settlement of the bay was still very low, so was our native population.
During Swan’s time on the bay, westward expansion was at a fever pitch and the Governor of the new Washington territory was eager to relocate tribes and open the area to settlement for non-native peoples.

As a people we went to the Anson Dart Treaty negotiations in 1851. The terms were found to be acceptable by the people of our region. One of the terms was that we were all to relocate to Willapa Bay. This was acceptable for the people already living in villages here. The problem with this treaty though is that Congress never ratified it.

In 1855 we met with Governor Isaac Stevens in Cosmopolis. Stevens’ terms were to relocate “All fish-eating tribes of western Washington” to the newly proposed reservation at Taholah.
Our leaders found these terms to be unacceptable. Our terms were very simple, we wished to be able to continue to hunt and fish, and to live and be buried with our ancestors. The settlers could do what they wished with land that was of no consequence to us.

With neither side being able to agree, the negotiations broke down and we refused to leave our traditional territory. Governor Stevens vowed to return and strike a deal or force us to submit, however, he was called back east to the Civil War where he was killed in action in 1862.
The people of Shoalwater Bay were largely forgotten by this time. For us, things kind of went back to normal. Most accounts from both sides say we got along fairly well with the new settler neighbors and there was not much thought about it.

However, during 1865-66 the government remembered we were here. The local Indian agent wrote to President Andrew Johnson about our situation. The letters stated that there was a group of natives “some 30 to 40 families” living on a village site on Shoalwater Bay. He continued by saying that we did not wish to give up our ways and simply wanted to secure our village for our selves and not be driven off. The land of our village was of no farming value and according to the letters “would work no injury to the whites”.

So on September 22, 1866, the president signed a one-paragraph executive order that basically says set this land aside for the Indians. The order was a milestone in that, through our stubborn refusal to submit we had secured our ancestral home as our own. However, the order was so vague and so short that it has often meant we secured nothing else. The original order also only secured just over 330 acres of land.

So today let us remember our ancestor’s determination to live their lives as we had forever and also let it reignite our pursuit for our rights to do so. Due to the vagueness of the order, our small size and unique location means that many of our issues in terms of relations with the U.S. government are unique even in Indian country. Our ancestor’s determination secured this life for us today, let us be as determined to secure a better life for our future generations as well.